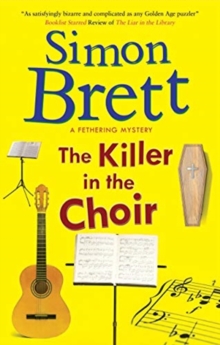 The killer in the choir

Part of the A Fethering mystery series

"Graced by ingeniously drawn characters, deft timing of twists, and a to-die-for climax.

A stunner" - Booklist Starred ReviewWhen Jude joins the Fethering community choir, she discovers that at least one of her fellow choristers is hiding a deadly secret. Although she hadn't known Leonard Mallett very well, nor liked him particularly, Carole Seddon feels duty bound to attend her fellow committee member's funeral. As she suspected, the hymns, readings and sermon are all very predictable - not unlike Leonard himself.

What she couldn't have predicted was that the deceased's daughter would use the occasion to publicly accuse her stepmother of murder. Did Heather Mallett really kill her husband, as many Fethering residents believe?

Deciding to get to the heart of the matter, Carole's neighbour Jude joins the new community choir - and discovers that amidst the clashing egos and petty resentments lurk some decidedly false notes.

At least one chorister would appear to be hiding a deadly secret - and it's up to Carole and Jude to unearth the truth.