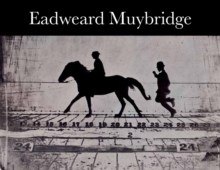 British-born Edweard Muybridge (1830-1904), who emigrated to the United States in the 1850s, is one of the most influential photographers of all time.

Best known for his series "Animal Locomotion", which as a book has never been out of print in some form since its first publication, he was the inventor of the zoopraxiscope, a method of projecting moving images that predated celluloid.

He constantly pushed the limits of the camera's possibilities, creating vast panoramas of the American landscape, capturing the lives of its people and documenting the nation's rapidly growing cities.

His dramatic life included extensive travels in North and South America, a career as a successful lecturer in Europe and standing trial for the murder of his wife's lover.

This magnificent book places Muybridge's life in the context of one of the most transformative periods of American and European history.

It features high quality tri-tone and 4-color illustrations of many of Muybridge's works, along with additional ephemera. Its thematic sections, written by leading authorities on the artist, unfold chronologically, examining Muybridge's engagement with the landscape of the American West; his documenting of the development of San Francisco; his giant plate landscape images of Yosemite; his chronicling of the last war against Native Americans; his attempts to find ways of photographing human beings and animals in motion, using multiple cameras and new technologies; and, his first experiments with moving images.

Including a timeline and facsimiles of Muybridge's correspondence, this will become a standard reference for people interested in a variety of disciplines, including photography, film, animation, art history, science, technology, historical and contemporary art.