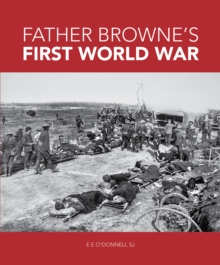 Joining the British Army as a Chaplain in 1916, he served for most of the war with the Irish Guards, ministering to the troops at the Somme, Messines Ridge, Paschendaele, Ypres, Amiens, and Arras.

Determined to stay at the front with his men, he was wounded five times, starting with a broken jaw in 1916, and was gassed in 1918.

Each time he returned to war as soon as his senior officers would let him.

His commanding officer described Fr Browne as "the bravest man I ever met".

Eddie O'Donnell SJ has written a fascinating account of Father Browne's war experiences, brought vividly to life with extracts from his letters, and illustrated throughout with photographs taken by Father Browne during the war.