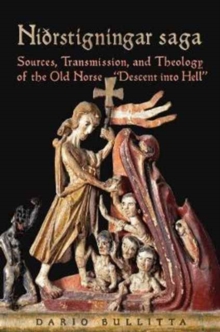 Niºrstigningar saga : sources, transmission, and theology of the Old Norse 'descent into Hell'

The Evangelium Nicodemi, or Gospel of Nicodemus, was the most widely circulated apocryphal writing in medieval Europe.

It depicted the trial, Passion, and crucifixion of Christ as well as his Harrowing of Hell.

During the twelfth-century renaissance, some exemplars of the Evangelium Nicodemi found their way to Iceland where its text was later translated into the vernacular and known as Nidrstigningar saga.

Dario Bullitta has embarked on a highly fascinating voyage that traces the routes of transmission of the Latin text to Iceland and continental Scandinavia.

He argues that the saga is derived from a less popular twelfth-century French redaction of the Evangelium Nicodemi, and that it bears the exegetical and scriptural influences of twelfth-century Parisian scholars active at Saint Victor, Peter Comestor and Peter Lombard in particular.

By placing Nidrstigningar saga within the greater theological and homiletical context of early thirteenth-century Iceland, Bullitta successfully adds to our knowledge of the early reception of Latin biblical and apocryphal literature in medieval Iceland and provides a new critical edition and translation of the vernacular text.