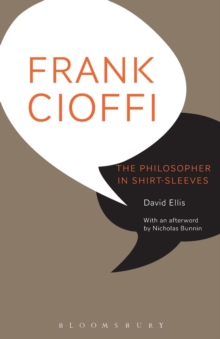 Frank Cioffi : the philosopher in shirt-sleeves

A high school drop-out who served in the American army and then managed to slip into Oxford on the G.I. bill, Frank Cioffi gained a considerable public reputation in Freudian and Wittgensteinian circles.

Frank Cioffi: The Philosopher in Shirt-Sleeves is an account of his conversation written in a Boswellian spirit, capturing the sharp intelligence, boisterous sense of humour and wealth of illustration Cioffi was able to bring to bear on life's biggest problems when he was, as it were, off-duty.

Tackling subjects such as the unruly body, the challenge of art, dealing with failure, the lure of science, the meaning of life, our understanding of others, depression, the case for suicide, and death, David Ellis describes how a philosopher who was profoundly influenced by Wittgenstein dealt with general issues and creates a vivid impression of an unusual and gifted individual. This portrait is followed by a post-script in which Nicholas Bunnin, who worked in the philosophy department at Essex when Cioffi was a professor there, situates him in a more strictly academic context and discusses his less well-known essays on literary criticism and the behavioural sciences, arguing for Cioffi's potential to inspire those seeking a role for analytic philosophy within the broader scope of humanistic philosophy.

A mixture of personal portrait and academic introduction, Frank Cioffi: The Philosopher in Shirt-Sleeves provides an elegant and enjoyable tribute to Cioffi as both man and philosopher.