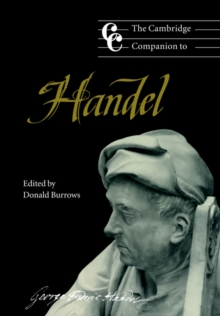 The Cambridge companion to Handel

By: Burrows, Donald (The Open University, Milton Keynes)(Edited by)

Part of the Cambridge Companions to Music series

Handel is recognised as one of the principal creative figures in Baroque music.

In this Companion acknowledged experts on Handel make their expertise accessible to the interested general reader and music lover.

All the genres in which Handel composed are considered including oratorio, chamber cantata, opera, and church music, as well as works for the keyboard and orchestra.

The wide-ranging, specially-commissioned essays cover topics from Handel's composing methods to his treatment of the Italian language and matters of performance practice.

The background to Handel's musical career is a major theme of the volume.

The opening chapters deal with his musical education in Germany and the circumstances in Italy during his time there.

Most of Handel's career was based in London and important topics here include contemporary concert life and theatre management, the British and Italian musicians among whom he worked, and the librettists for the English oratorios.