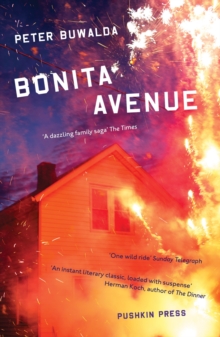 When Aaron meets his girlfriend Joni's family for the first time, her multitalented father could hardly be a more intimidating figure, but somehow the underachieving photographer manages to bluff his way to a friendship with the paterfamilias.

With his feet under the table at the beautiful Sigerius farmhouse, Aaron feels part of the family.

A perfect family. Until, that is, things start to go wrong in a very big way.

A cataclysmic explosion in a firework factory, the advent of internet pornography, the reappearance of a forgotten murderer and a jet-black wig-all play a role in the spectacular fragmentation of the Sigerius clan... and of Aaron's fragile psyche. 'One wild ride: a swirling helix of a family saga...a new writer as toe-curling as early Roth, as roomy as Franzen and as caustic as Houellebecq.

Bonita Avenue is a family epic seething with learning and regret, the kind with which commuting becomes a pleasure.' New Statesman'A brilliantly constructed story, with complex characters tested to the limit' The Lady'One of the first great European novels of the 21st century' Foyles Bookshop interview with author Highly, highly recommended reading.Savidge ReadsIf I had to choose one first novel, it would be the addictive bedlam of Bonita Avenue... deserves to be a book, not just a debut, of the year' Independent Books of the Year'Dripping with sex and bursting with comedy... in a plot of fiendish ingenuity. Buwalda has a cold eye for the hilarity of human disaster that would make Evelyn Waugh blanch.

Read this book, love it, and try to ignore the twisting in your gut.' Booktrust'Great European art: the Dutchman Peter Buwalda explodes the bourgeois family saga.

The narrative pyrotechnics alone are a tour de force.' Die ZeitBorn in Brussels in 1971, Peter Buwalda is a Dutch novelist, formerly a journalist, editor at several publishers, and founder of the literary music magazine Wah-Wah.

Bonita Avenue is his debut novel. Published in 2010 to critical acclaim, it was shortlisted for twelve prizes, going on to win the Academica Prize, the Selexyz Debut Prize, the Tzum Prize, the Anton Wachter Prize and the Leesclubboek van het jaar.

It spent two years on the bestseller lists, and has since been translated into seven languages.