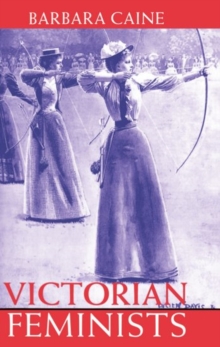 This is a study of Victorian feminism which focuses on four leading feminists: Emily Davies, Frances Power Cobbe,Josephine Butler, and Millicent Garrett Fawcett.

This approach enables Barbara Caine to uncover the range, diversity, and complexity of Victorian feminism, and to examine the relationship between personal experience and feminist commitment. Professor Caine sets her carefully researched biographical studies of the four women, each with her own fascinating history, in the context of the Victorian feminist movement.

She explores the ideas and strategies of feminists in the late nineteenth century, analysing the tensions which arose as they sought to achieve their aims.

In particular, she traces the complex relationship between party politics and feminist commitment. Barbara Caine's insight into the vision and beliefs of these Victorian feminists is balanced by her scholarly understanding of the society within which they worked.

She gives us vivid and perceptive portraits of four very different individuals, who nevertheless shared a commitment to improving the lot of women.