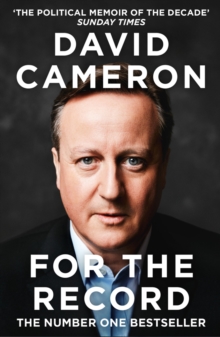 'The political memoir of the decade' Sunday Times The #1 Sunday Times Bestseller What was it like to lead the Conservative Party back to power and form a coalition government?

How does a Prime Minister turn around an economy, handle a migration crisis and respond to a rapidly changing Europe?

Why call a referendum on Britain's EU membership? David Cameron answers these questions and more with a candour that extends beyond the events he faced to the people he encountered and, fascinatingly, to the things he got right and wrong. He talks too about what has happened in the four years since that momentous vote in what is the frankest insight yet into the inner workings of politics and the mind of one man who was at the heart of it.