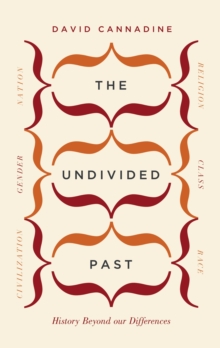 The undivided past : history beyond our differences

An impassioned, controversial plea for us to recognise the importance of writing history - from world-famous historian David CannadineDavid Cannadine is one of Britain's most distinguished historians and this is his masterpiece.

The Undivided Past is an agonised attempt to understand how so much of the writing of history has been driven by a fatal desire to dramatize differences - to create an 'us versus them'.

Great works of history have so often had at their heart a wish to sift people in ways that have been profoundly damaging and provided the intellectual backing and justification for terrible political decisions.

Again and again, categories have been found--whether religion, nation, class, gender, race or 'civilization'--that have sought to explain world events by fabricating some malevolent or helpless 'other'.

This book is above all an appeal to common humanity.

We seem doomed always to fall (most recently in the wake of 9/11) into the 'us versus them' trap, but there is no reason why the history we read and write should not be much better than this and describe what we all have in common rather than what divides us. About the author:Sir David Cannadine is Chair of the National Portrait Gallery, Dodge Professor of History at Princeton University and General Editor of the Penguin History of Europe and Penguin History of Britain.

He is a Fellow of the British Academy and the Chair of the Blue Plaques Committee.

His major books include The Rise and Fall of the British Aristocracy, Ornamentalism and Mellon: A Life.

He is currently writing the Penguin History of Victorian Britain.

He has previously taught at Cambridge, Columbia and London universities.