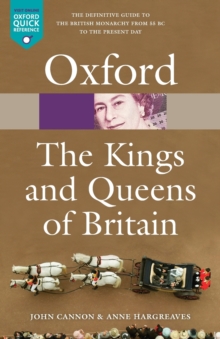 The kings & queens of Britain

This authoritative and accessible guide to the British monarchy spans the Romano-British rulers of 55 BC to the present day House of Windsor.

Generously illustrated with maps, photos, paintings, and genealogies, it contains a wealth of information on the rulers of Britain, including their policies, personalities, key dates, and legacies.

There are almost 600 entries, which are organised by regions up to 1066 and by royal lines thereafter.

Revised and updated to include recent events, such as the second marriage of Prince Charles, this new edition also contains a topical introductory article on the changing role of the monarchy.

There is a useful glossary, a list of recommended further reading, and a new appendix of recommended web links, accessed and kept up to date via a companion website.

Comprehensive and elegantly written, this fascinating guide to the British monarchy is an essential reference resource for teachers and students of British history, and for anyone with an interest in Britain's rulers through the ages.