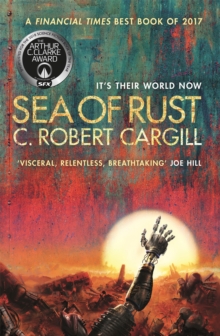 Shortlisted for the Arthur C. Clarke Award 2018 One of Financial Times' Best Books of 2017'SEA OF RUST is a 40-megaton cruise missile of a novel - it'll blow you away and lay waste to your heart . . . visceral, relentless, breathtaking' Joe Hill, Sunday Times bestselling author ************An action-packed post-apocalyptic thriller from the screenwriter of Marvel's DOCTOR STRANGEHUMANKIND IS EXTINCT. Wiped out in a global uprising by the very machines made to serve them.

Now the world is controlled by OWIs - vast mainframes that have assimilated the minds of millions of robots.

But not all robots are willing to cede their individuality, and Brittle is one of the holdouts.

After a near-deadly encounter with another AI, Brittle is forced to seek sanctuary in a city under siege by an OWI.

Critically damaged, Brittle must evade capture long enough to find the essential rare parts to make repairs - but as a robot's CPU gradually deteriorates, all their old memories resurface.

For Brittle, that means one haunting memory in particular . . . ************ 'The novel does not stint on action and violence, but what lingers in the mind are its brutal vision of a world cannibalising itself and the poignant questions it raises about soul and sentience' FINANCIAL TIMES