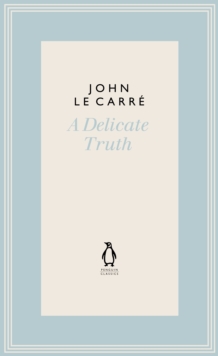 'With A Delicate Truth, le Carre has in a sense come home. And it's a splendid homecoming . . . the novel is the most satisfying, subtle and compelling of his recent oeuvre' The TimesA counter-terror operation, codenamed Wildlife, is being mounted in Britain's most precious colony, Gibraltar.

Its purpose: to capture and abduct a high-value jihadist arms-buyer.

So delicate is the operation that even the Minister's Private Secretary, Toby Bell, is not cleared for it. Suspecting a disastrous conspiracy, Toby attempts to forestall it, but is promptly posted overseas.

Three years on, summoned by Sir Christopher Probyn, retired British diplomat, to his decaying Cornish manor house, and closely watched by Probyn's daughter Emily, Toby must choose between his conscience and his duty to the Service. If the only thing necessary for the triumph of evil is that good men do nothing, how can he keep silent?__________________'No other writer has charted - pitilessly for politicians but thrillingly for readers - the public and secret histories of his times, from the Second World War to the 'War on Terror'' Guardian'The master of the modern spy novel returns . . . John le Carre was never a spy-turned-writer, he was a writer who found his canvas in espionage' Daily Mail 'A brilliant climax, with sinister deaths, casual torture, wrecked lives and shameful compromises' Observer