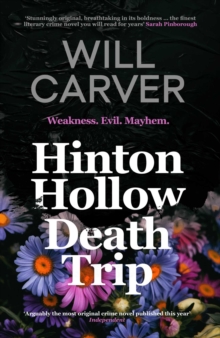 Five days in the history of a small rural town, visited and infected by darkness, are recounted by Evil itself.

A stunning high-concept thriller from the bestselling author of Good Samaritans and Nothing Important Happened Today. 'Cements Carver as one of the most exciting authors in Britain.

After this, he'll have his own cult following' Daily Express'Will Carver is an exhilarating and audacious new voice in literary crime fiction' Sarah Pinborough'A new Will Carver novel is always something to look forward to, and this is no exception.

A small town with small lives that you would never have heard about if none of this had happened. Hinton Hollow. Population 5,120. Little Henry Wallace was eight years old and one hundred miles from home before anyone talked to him.

His mother placed him on a train with a label around his neck, asking for him to be kept safe for a week, kept away from Hinton Hollow. Because something was coming. Narrated by Evil itself, Hinton Hollow Death Trip recounts five days in the history of this small rural town, when darkness paid a visit and infected its residents.

A visit that made them act in unnatural ways. Prodding at their insecurities. Nudging at their secrets and desires. Coaxing out the malevolence suppressed within them. Showing their true selves. Making them cheat. Making them steal. Making them kill. Detective Sergeant Pace had returned to his childhood home.

I would join Will Carver's cult. He's the most original writer around...' Helen FitzGerald'A novel so dark and creepy Stephen King will be jealous he didn't think of it first' Michael Wood'One of the most compelling and original voices in crime fiction ...

The whole thing feels like a shot of adrenaline' Alex North'Twisty-turny and oh-so provocative, this is the type of book that will stick a sneaky foot out to trip you up' Liz Robinson, LoveReading'Deliciously fresh and malevolent story-telling ... a laminate-you-to-your-chair, page-whirring dive into a small British town that is turned on its head over the course of a few days.

If you like something fresh and unusual, grab this book' Craig Sisterson'It's going to take something special to top this as my book of 2020. Original, thought provoking and highly recommended' Mark TilburyPraise for Will Carver***Nothing Important Happened Today was longlisted for the Theakston's Old Peculier Crime Novel of the Year***'Weirdly page-turning' Sunday Times'Laying bare our 21st-century weaknesses and dilemmas, Carver has created a highly original state-of-the-nation novel' Literary Review'Arguably the most original crime novel published this year' Independent'At once fantastical and appallingly plausible ... this mesmeric novel paints a thought-provoking if depressing picture of modern life' Guardian'This book is most memorable for its unrepentant darkness...' Telegraph'Unlike anything else you'll read this year' Heat'Utterly mesmerising...' Crime Monthly