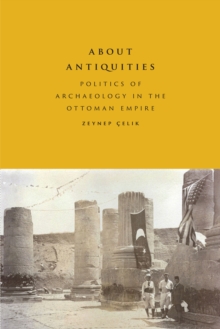 About Antiquities : Politics of Archaeology in the Ottoman Empire

Antiquities have been pawns in empire-building and global rivalries; power struggles; assertions of national and cultural identities; and cross-cultural exchanges, cooperation, abuses, and misunderstandings-all with the underlying element of financial gain.

Indeed, "who owns antiquity?" is a contentious question in many of today's international conflicts. About Antiquities offers an interdisciplinary study of the relationship between archaeology and empire-building around the turn of the twentieth century.

Starting at Istanbul and focusing on antiquities from the Ottoman territories, Zeynep Celik examines the popular discourse surrounding claims to the past in London, Paris, Berlin, and New York.

She compares and contrasts the experiences of two museums-Istanbul's Imperial Museum and the Metropolitan Museum of Art-that aspired to emulate European collections and gain the prestige and power of owning the material fragments of ancient history.

Going beyond institutions, Celik also unravels the complicated interactions among individuals-Westerners, Ottoman decision makers and officials, and local laborers-and their competing stakes in antiquities from such legendary sites as Ephesus, Pergamon, and Babylon. Recovering perspectives that have been lost in histories of archaeology, particularly those of the excavation laborers whose voices have never been heard, About Antiquities provides important historical context for current controversies surrounding nation-building and the ownership of the past.