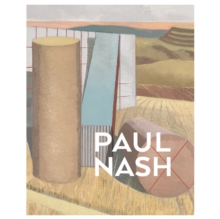 Paul Nash is one of the most distinctive and important British artists of the 20th century.

He is known for his work as an official war artist, producing some of the most memorable images of the First and Second World Wars, and also as one of the most evocative landscape painters of his generation.

While best known for his British landscapes, Nash was also a pioneer of modernism in Britain, promoting the avant-garde European styles of abstraction and surrealism in the 1920s and 1930s.

A major retrospective from Tate Britain will chart the developments of Nash's career for the first time through the lens of this perspective, showing how his landscapes provided a stage for his engagements with international modernism.

Featuring works from across the four decades of his rich career, including oils, watercolours, assemblages and photographs, the exhibition and accompanying catalogue will be the first to examine Nash's work in an international context.The publication will explore how he drew on surrealist ideas to interpret the British landscape in a way that made connections between modernism and tradition, from his early Symbolist manner, through to the iconic works of the First World War as well as his major landscapes of the interwar period and his 1940s landscape series engaging with natural cycles. The catalogue will present new scholarship on Nash, highlighting in particular his connections with and contributions to modernist groupings; his interest in animism and mythological texts; his use and transformation of found objects (in creative dialogue with Eileen Agar); and his interest in archaeology.

Fully illustrated with over 100 beautifully reproduced works from Nash's entire career and a wealth of archival material (some of it never before published), this is a timely survey of one of the most distinctive and well-loved artists of the 20th century.