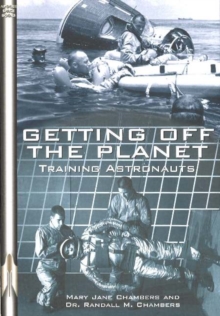 Getting off the planet : training astronauts

Today, the training of American astronauts is almost taken for granted, but prior to 1961 no one knew whether humans could function in space at all.

Space suits, working in free fall, and surviving the punishing accelerations of launch and re-entry were all complete unknowns.

It was well recognised that if we were to send men into space, they would first have to be extensively trained.

But what was that training to consist of? And exactly who would provide the training? As it turns out, the training was, at times, as dangerous and demanding as the space flights that followed - for the training experts as well as the astronauts.

At the forefront of the effort to train America's astronauts was Dr Randall Chambers.

Over the course of a long and distinguished career he turned his mind (and body) to a wide variety of disciplines, in order to best prepare our astronauts for space flight.

It was not unusual for Dr Chambers to put himself in the astronaut's position, literally - before he would put the astronaut there. Dr Chambers and his co-workers not only had to be the very best in their profession, they had to define and refine that profession as they went along - pioneers in the truest sense of the word.

As the requirements and demands of human space activities increased, the lives of the astronauts were completely dependent on their trainers always being one step ahead of them.

Career journalist Mary Jane Chambers has witnessed her husband's career first hand, and has worked with him to present a story that non-scientists will enjoy - no equations, no charts; but rather a human tale of amazing people.

This book is the story of a dedicated man of science, a friend of the astronauts, and an unsung hero of the space age.

Behind every successful space program there are special people with the dedication of Dr Randall Chambers.