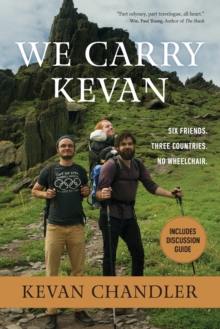 Kevan is just one of the guys. It's impossible to know him and not become a little more excited about life.

He is an inspiring man permeated by joy, unafraid of sorrow, full of vitality and life!

His sense of humor is infectious and so is his story.He grew up, he says, at 'belt-buckle level' and stayed there until Kevan's beloved posse decided to leave his wheelchair at the Atlanta airport, board a plane for France, and have his friends carry him around Europe to accomplish their dream to see the world together!

Kevan's beloved posse traveled to Paris, England, and Ireland where, in the climax of their adventure, they scale 600 feet up to the 1,400-year-old monastic fortress of Skellig Michael.In WE CARRY KEVAN the reader sits with Kevan, one head-level above everyone else for the first time in his life and enjoys camaraderie unlike anything most people ever experience.

Along the way they encounter the curiosity and beauty of strangers, the human family disarmed by grace, and the constant love of God so rich and beautiful in the company of good friends.

WE CARRY KEVAN displays the profound power of friendship and self-sacrifice.