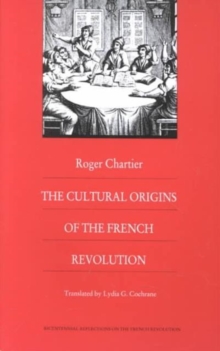 The Cultural Origins of the French Revolution

Part of the Bicentennial Reflections on the French Revolution series

Reknowned historian Roger Chartier, one of the most brilliant and productive of the younger generation of French writers and scholars now at work refashioning the Annales tradition, attempts in this book to analyze the causes of the French revolution not simply by investigating its "cultural origins" but by pinpointing the conditions that "made is possible because conceivable."Chartier has set himself two important tasks.

First, while acknowledging the seminal contribution of Daniel Mornet's Les origens intellectuelles de la Revolution francaise (1935), he synthesizes the half-century of scholarship that has created a sociology of culture for Revolutionary France, from education reform through widely circulated printed literature to popular expectations of government and society.

Chartier goes beyond Mornet's work, not be revising that classic text but by raising questions that would not have occurred to its author. Chartier's second contribution is to reexamine the conventional wisdom that there is a necessary link between the profound cultural transformation of the eighteenth century (generally characterized as the Enlightenment) and the abrupt Revolutionary rupture of 1789.

The Cultural Origins of the French Revolution is a major work by one of the leading scholars in the field and is likely to set the intellectual agenda for future work on the subject.