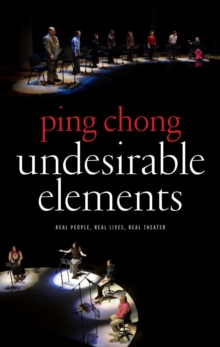 By: Chong, Ping,  Solomon, Alisa(Introduction by)

"The cumulative power of these shared stories is nothing short of astonishing. Ping Chong creates a tremendous tapestry of lives."—Twin Cities Reader

In Chong's extraordinary series of choral documentary dramas, bodies that had once been rendered 'undesirable elements' become - as bodies on stage always do, through the theater's magical mechanisms of empathy and display - emphatically desirable. The performers - who are not professional actors - live in the community where they are performing and, most important, they are telling their own stories. Through the act of naming themselves and recounting how they came to be here - quite literally here, now, in the theater, as well as here in this town in the United States - they claim their place in the body politic. Theater, like America, is a space of self-making. TheUndesirable Elementsseries offers a distilled, elegant demonstration of that exhilarating and complicated process." - Alisa Solomon, from Her Introduction

This four-piece volume ofUndesirable Elements, the community-specific theater works series, examines the lives of those born into one culture but living in another. Each production grows out of an extended residency, during which Ping Chong and his collaborators conduct interviews of community members and then create a script that explores both historical and personal narratives.

Ping Chongis a theater director, playwright, choreographer, and video and installation artist. The recipient of two OBIE awards, two Bessie awards, and a Guggenheim Fellowship, he has created more than fifty works for the stage, including twenty-five in hisUndesirable Elementsseries.