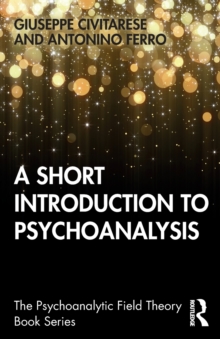 A short introduction to psychoanalysis

The science of psychoanalysis is now more than a century old.

During this period, it has been established as the instrument offering the most profound understanding of the human mind, and as the most effective tool for treating psychic suffering we have at our disposal.

In this short volume, Giuseppe Civitarese and Antonino Ferro explore psychoanalysis, which is at the same time a theory of unconscious psychic processes, a technique for investigating these, and a method for curing various forms of psychic suffering, by explaining some of its main themes and ideas.

As the only introductory text to the increasingly popular post-Bionian theory of the analytic field, A Short Introduction to Psychoanalysis examines the theory of dreams, the concept of the unconscious, the psychoanalytic clinic, the analysis of children and adolescents, and the history of psychoanalysis. In seeking to give a broad idea of what psychoanalysis is, what it has become, and the direction it may take in the future, this book will appeal to all those curious about this fascinating discipline, and is particularly aimed at students of psychology, the humanities, and of psychoanalytic institutes, as well as qualified psychoanalysts and psychotherapists.