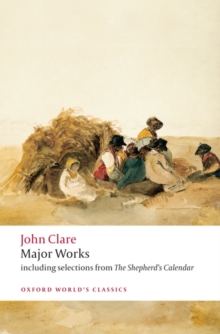 This authoritative edition was originally published in the acclaimed Oxford Authors series under the general editorship of Frank Kermode. It brings together a generous selection of Clare's poetry and prose, including autobiographical writings and letters. John Clare (1793-1864) is now recognized as one of the greatest English Romantic poets, after years of indifference and neglect. Clare was an impoverished agricultural labourer, whose genius was generally not appreciated by his contemporaries, and his later mental instability further contributed to his loss of critical esteem. But the extraordinary range of his poetical gifts has restored him to the company of his contemporaries Byron, Keats, and Shelley, and this fine selection illustratesall aspects of his talent. It contains poems from all stages of his career, including love poetry, and bird and nature poems. Written in his native Northamptonshire, Clare's work provides a fascinating reflection of rural society, often underscored by his own sense of isolation and despair. Clare's writings are here presented with the minimum of editorial interference, and with a new Introduction by the poet and scholar Tom Paulin.