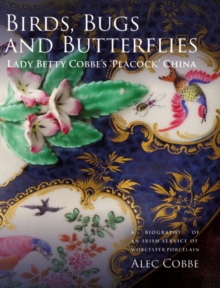 2020 Winner of the American Ceramic Circle Book Award The early years of the famous Worcester porcelain factory established by Dr Wall have always been a little mysterious, owing to the destruction of the records of thebusiness for this period.

Alec Cobbe's discovery of family papers listing the purchases over a period of years of a particularly beautiful and ornate table set have enabled him to give a vivid glimpse of how the factory interacted with its customers.

He is able to describe the commissioning of perhaps the largest service of first period Worcester porcelain on record by Thomas and Lady Betty Cobbe for Newbridge House Co.

Dublin. It was bought in stages from 1763 as the family travelled from Dublin to Bath each year, stopping at Worcester en route, as other Irish gentry did.

The Cobbe service, uniquely in the context of British porcelain, was accompanied by a full set of Irish silver and steel cutlery fitted with Worcester porcelain handles matching the service.

The various pieces of porcelain and their historical context are described as well as their painted decoration, and the sources for it.

The later history of the service is outlined and its gradual dispersal in the nineteenth century, culminating in a final sale of the remaining pieces lot by lot in a Christie's sale in 1920.

This book celebrates Cobbe's reassembly of more than 160 pieces of the original service over a period of more than thirty years and their return to Newbridge following their exhibition in the State Apartments at Dublin Castle.

Overall, the book gives an important insight into Irish social life and patronage in the mid-eighteenth century. Alec Cobbe was born in Ireland and still resides in Newbridge House, Co.

Dublin, where his ancestors have lived since it was built in the middle of the eighteenth century.

He practises as an artist and designer. As a passionate collector, he added to his family's historic collections and assembled the world's largest group of composer-owned keyboard instruments.