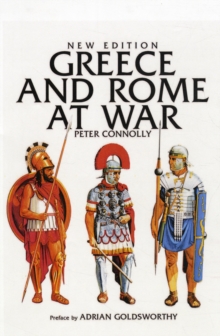 Greece and Rome at War

In this sumptuous guide to twelve centuries of military development, Peter Connolly combines a detailed account of the arms and armies of Greece and Rome with his superb full-colour artwork.

Making use of fresh archaeological evidence and new material on the manufacture and use of the weapons of the period, the author presents an attractive and impressive volume that is both scholarly and beautifully presented with illustrations that are, quite rightly, recognised as being the best and most accurate representation of how the soldiers from these formidable military empires appeared.Greece and Rome at War lucidly demonstrates the face of battle in the ancient world.

Covering the wars between the Greeks and the Persians and the epic contest between the Romans and their most capable opponent, Hannibal, as well as organisation, tactics, armour and weapons, and much more, this excellent work brings the armies of Greece, Macedon and Rome vividly to life.

This new revised edition contains a Preface by Adrian Goldsworthy.