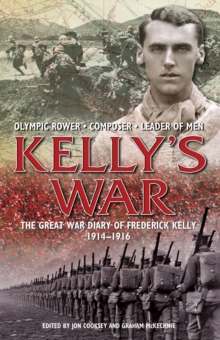 In this remarkable book, historians Jon Cooksey and Graham McKechnie present the extraordinary story of Frederick Kelly, the musician, composer and Olympic rower, killed in action during the Great War. Frederick Kelly's war diary, written between 1914 and 1916, is a unique document recording some of the most significant events of the 20th century. This is the story of a singular, brave and brilliant man who inspired the respect of those who served with him and the love and devotion of his many friends.

It is not just a war diary - it is about music, art and humanity.

Kelly was a man who, in the depths of war, still found time to compose evocative music or use the songs of Wagner to entice German soldiers to surrender.

Despite his eccentricities and artistic temperament, he repeatedly proved himself on brutal battlefields, from Gallipoli to the Somme, without losing his tenderness of sense of humour.