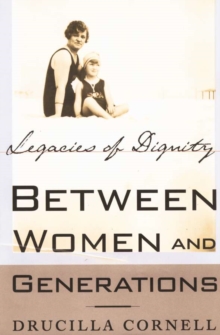 Between women and generations : legacies of dignity

Before the author's mother died, she asked her daughter, Drucilla, to write a book "that would bear witness to the dignity of her death [and one that] her bridge class would be able to understand." As if that wasn't difficult enough, Drucilla's mother, who had a degenerative disease, decided to end her life by ingesting a lethal cocktail of drugs.

Drucilla was in the unenviable position of bearing witness to her mother's act.

This is the book that Drucilla promised her mother she'd write.

Unlike her earlier academically oriented books, "Between Women and Generations" is an intensely personal narrative which interweaves the personal and political decisions Drucilla's made throughout her life.

She uses the personal as a springboard to talk about larger philosophical issues such as how one achieves dignity in life and in death, and the nature of intergenerational relationships between women.

Drucilla speaks candidly of her relationship with her mother, about her decision to adopt a non-Western child, and about her commitment to UNITY, a co-operative of house cleaners in Long Island, New York.