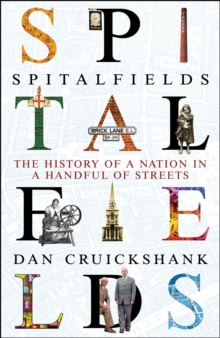 Spitalfields : the history of a nation in a handful of streets

SHORTLISTED FOR THE HESSELL-TILTMAN HISTORY PRIZE 2017AN OBSERVER BOOK OF THE YEAR 2016Religious strife, civil conflict, waves of immigration, the rise and fall of industry, great prosperity and grinding poverty - the handful of streets that constitute modern Spitalfields have witnessed all this and much more.

In Spitalfields, one of Britain's best-loved historians tells the stories of the streets he has lived in for four decades.

Starting in Roman times and continuing right up to the present day, Cruickshank explains how Spitalfields' streets evolved, what people have lived there, and what lives they have led.

En route, he discovers the tales of the Huguenot weavers who made Spitalfields their own after the Great Fire of London.

He recounts the experiences of the first Jewish immigrants.

He evokes the slum-ridden courts and alleys of Jack the Ripper's Spitalfields. And he describes the transformation of the Spitalfields he first encountered in the 1970s from a war-damaged collection of semi-derelict houses to the vibrant community it is today. This is a fascinating evocation of one of London's most distinctive districts.

At the same time, it is a history of England in miniature.