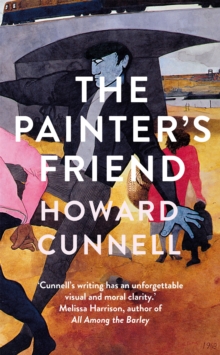 'One of the books of the year. Cunnell's style is matchless: intimate, dark, sincere, wry and exquisitely beautiful' - Irish Times'I loved it.

Cunnell's writing has an unforgettable visual and moral clarity' - Melissa Harrison, author of All Among the BarleyThe painter Terry Godden was on the brink of his first success.

After a violent crisis, he finds himself outcast. In his fifties, and with little money, he retreats to a small island.

Arriving in the winter, the island at first seems a desolate and forgotten place.

As the seasons turn, Terry begins to see the island's beauty, and discovers that he is only one of many people who have sought refuge here.

These independent outsiders, all with their own considerable struggles, have made a precarious home. The island is owned by the business man and art collector Alex Kaplan.

His decision to enforce a rent increase as he seeks to improve his property looks set to destroy this community that cannot afford to lose the little they have left.

As an artist, Terry believes making the invisible struggles of the island visible to the world will help - but will his interference save anybody other than himself?The Painter's Friend shows the human cost of gentrification for those dispossessed.

The novel also explores the role of art in protest, and asks who gets to be an artist and what they owe in return.

Written with visual lyricism and driven clarity, Howard Cunnell's incendiary story about class and resistance builds to an unforgettable climax.

It is an urgent novel for our unjust times.