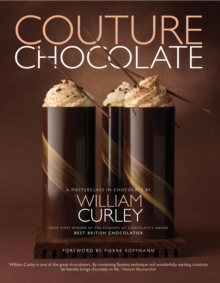 By: Curley, William,  Koffman, Pierre(Foreword by)

With its unique recipes and sumptuous photographs, this stunningly delicious cookbook delivers a lifetime's worth of culinary excitement and experimentation into your kitchen.

Join award-winning chocolatier William Curley as he examines the origins of one of the world's most popular foods--explaining the method of creating chocolate, how its quality depends to a large extent on the variety of beans used, and the differences between plain, milk and white chocolates.

It reveals how some of today's most popular flavors - such as vanilla and chilli - were those favored by the pioneering Aztec chocolatiers centuries ago. William shares his techniques and most mouth-watering recipes, starting with the basics: tempering and making a bar of chocolate; advice on how to add exotic flavours like rosemary or raspberry; and introducing different textures.

Once those skills have been mastered, it's time to tackle some of the authors incredible creations...from experimental (but delicious) fillings such as apricot and wasabi, sea salt caramel, black rice vinegar and thyme, to mouthwatering desserts including chocolate and pistachio cake, blackcurrant tea cake, millionaire shortbread, macaroons, and chocolate rosette with orange ganache, as well as a variety of chocolate ices, drinks, sauces and spreads including Gianduja chocolate, Tahitian vanilla and golden chestnut.

With William Curley as a guide, you need never eat a bland dessert again.