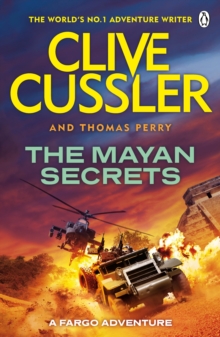 Part of the Fargo adventures series

The Mayan Secrets is the exceptional fifth Fargo Adventure novel by Clive Cussler. Mexico, present day: a revelation of precious knowledge from the past has the power to change the course of humanity's future. Treasure-hunting husband and wife team Sam and Remi Fargo are in Central America when they come upon a remarkable discovery - the skeleton of a man clutching an ancient sealed pot.

Inside the pot is a well-preserved Mayan book, larger than any previously found by archaeologists. The book contains astonishing information about the Mayans, about their cities, and about mankind itself.

The secrets are so powerful that some people would do anything to possess them - as the Fargos are about to find out. Before their adventure is done, men and women will die for the riches contained in the ancient book - and it's just possible that Sam and Remi may be among them . . . With all the breakneck pace, wild imagination and high stakes thrills that Clive Cussler has made his own, The Mayan Secrets proves once again that the World's No.1 Adventure Writer is in a league of his own.

It is the latest in the gripping Fargo Adventure series, following the bestselling titles Spartan Gold, Lost Empire, The Kingdom and The Tombs. Praise for Clive Cussler:'Clive Cussler is hard to beat' Daily Mail'The guy I read' Tom Clancy'The adventure king' Daily Express