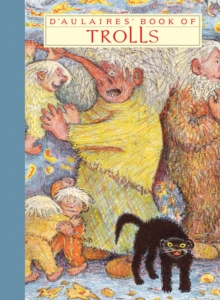 Part of the The New York Review children's collection series

Trolls of all kinds-mountain trolls, forest trolls, trolls who live underwater and trolls who live under bridges, uncouth, unkempt, unbearable, unforgettable, and invariably unbelievably ugly trolls-fill the pages of D'Aulaires' Book of Trolls, the spectacularly illustrated and delightfully entertaining companion volume to the much-acclaimed D'Aulaires' Book of Norse Myths.

Here the husband-and-wife team of Ingri and Edgar Parin d'Aulaire explore the shadow side of Norse mythology, the night world in which the trolls work their wiles and carry on in the most bizarre and entertaining fashions, hunting for babies to eat or squabbling with each other in the blueberry patch.

Trolls with multiple heads, trolls with heads they carry under their arms, and trolls with only one eye to share around, along with troll wives, whose long red noses are just the thing for stirring soup, roam the mountains of the north by night and retreat by day to sleep in caves full of silver and gold.

With their matchless talent as storytellers and illustrators, the d'Aulaires bring to life the weird and wonderful world of Norse mythology.