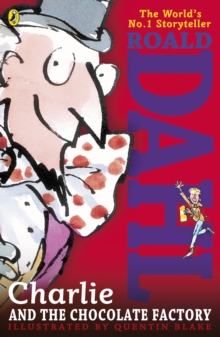 The famous story of Charlie Bucket and his Golden Ticket, and Willy Wonka and his amazing chocolate factory.

Mr Willy Wonka, the most wondrous inventor in the world, opens his gates of his amazing chocolate factory to five lucky children.

Gobstoppers, wriggle sweets and a river of melted chocolate delight await - Charlie needs just one Golden Ticket and these delicious treats could all be his!

Roald Dahl, the best-loved of children's writers, was born in Wales of Norwegian parents. His books continue to be bestsellers, despite his death in 1990, and total sales are over 100 million worldwide!

Quentin Blake is one of the best-known and best-loved children's illustrators and it's impossible now to think of Roald Dahl's writings without imagining Quentin Blake's illustrations.

Quentin Blake is one of Britain's most successful illustrators.

His first drawings were published in Punch when he was sixteen. He has illustrated nearly three hundred books and he was Roald Dahl's favourite illustrator.

He has won many awards including the Whitbread Award and the Kate Greenaway Medal.

Besides being an illustrator he taught for over twenty years at the Royal College of Art and in 1999 he became the first ever Children's Laureate!

Six years later he was awarded a CBE for services to children's literature and in 2013 he was knighted in the New Year's Honours - which means his full title is Sir Quentin Blake, although we can still all go on calling him Quentin as usual.

The title has been replaced.To check if this specific edition is still available please contact Customer Care +44(0)1482 384660 or schools.services@brownsbfs.co.uk, otherwise please click 9780141365374 to take you to the new version.