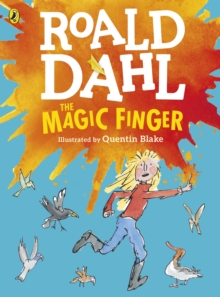 Phizzwhizzing new cover look and branding for the World's NUMBER ONE Storyteller!Every Saturday morning the Greg family goes off to shoot animals and birds.

But the girl who lives next door hates hunting. Now it's made her so angry she's PUT THE MAGIC FINGER ON THEM ALL. And very strange things have begun to happen . . . Listen to THE MAGIC FINGER and other Roald Dahl audiobooks read by some very famous voices, including Kate Winslet, David Walliams and Steven Fry - plus there are added squelchy sound-effects from Pinewood Studios!

Look out for new Roald Dahl apps in the App store and Google Play- including the disgusting TWIT OR MISS! and HOUSE OF TWITS inspired by the revolting Twits.