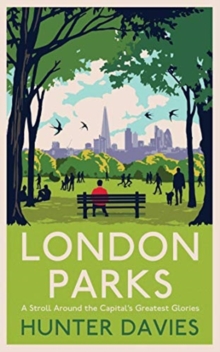 Join Hunter Davies on a celebratory stroll around London's greatest glories - its parks. We need our parks more than ever before, for our health and spirits, our bodies and souls, to keep us fit, to save us from pollution, to protect nature and wildlife; and Londoners are lucky enough to enjoy more green spaces than any other major city in the world. In London Parks, Hunter Davies illustrates their wonders by spending a year walking round his favourite parks.

From his local haunt on Hampstead Heath to the capital's latest wonder, the Queen Elizabeth Olympic Park, each one is chosen for its unique appeal.

Informative and entertaining, he details their history, describes their layout and reveals hidden delights and new attractions that might otherwise be missed, such as the statue of a small brown dog in Battersea Park, a garden full of exotic plants and palm trees in south London's Burgess Park or, for something completely unique, Ian Dury's musical memorial bench in Richmond Park. Fun, thought-provoking and uplifting, London Parks is an essential companion for anyone wishing to explore the ever-green beauty of Britain's capital city, whether it's spotting pelicans and politicians in St James's Park, the birds in the London Wetland Centre or the views from Greenwich Park.