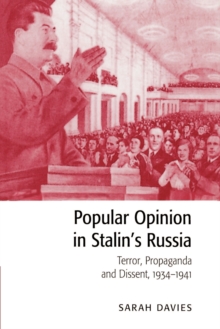 Between 1934 and 1941 Stalin unleashed what came to be known as the 'Great Terror' against millions of Soviet citizens.

The same period also saw the 'Great Retreat', the repudiation of many of the aspirations of the Russian Revolution.

The response of ordinary Russians to the extraordinary events of this time has been obscure.

Sarah Davies's study uses NKVD and party reports, letters and other evidence to show that, despite propaganda and repression, dissonant public opinion was not extinguished.

The people continued to criticise Stalin and the Soviet regime, and complain about particular policies.

The book examines many themes, including attitudes towards social and economic policy, the terror, and the leader cult, shedding light on a hugely important part of Russia's social, political, and cultural history.