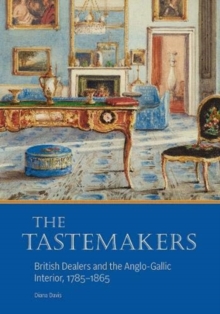 The Tastemakers - British Dealers and the Anglo-Gallic Interior, 1785-1865

In this volume, Diana Davis demonstrates how London dealers invented a new and visually splendid decorative style that combined the contrasting tastes of two nations.

Departing from the conventional narrative that depicts dealers as purveyors of antiquarianism, Davis repositions them as innovators who were key to transforming old art objects from 'ancien re gime' France into cherished "antiques" and, equally, as creators of new and modified French-inspired furniture, bronze work, and porcelain.

The resulting old, new, and reconfigured objects merged aristocratic French eighteenth-century taste with nineteenth-century British preference, and they were prized by collectors, who displayed them side by side in palatial interiors of the period. 'The Tastemakers' analyzes dealer-made furnishings from the nineteenth-century patron's perspective and in the context of the interiors for which they were created, contending that early dealers deliberately formulated a new aesthetic with its own objects, language, and value.

Davis examines a wide variety of documents to piece together the shadowy world of these dealers, who emerge center stage as a traders, makers, and tastemakers.