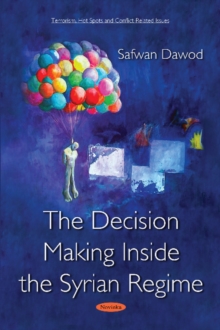 The Decision Making Inside the Syrian Regime

The regime structure and its dominant relation can be studied through the standard and levels of decision characteristics, its making centers, and the basis of the official discourse as well as the mechanisms of investing the legitimacy conception.

Studying the subjects of this book required the considering of the superimposition context which may be included in the causes of the crisis explosion; in view of the fact that it carries with itself a time particularity in the development of its internal corrosion (i.e., local consciousness), it justifies going into some historical and political issues.

The time profundity provided by discussing some of these issues reveals some phenomena of the problem with the regimes considerate discourse with and within the historical and political contexts of the Syrian society and their relation with hegemony patterns.

This book, therefore, depended on social and critical ideas of the Syrian society.

The most important problem which had not been previously treated enough was discussed: it is that the decision-making monopoly in Syria was accompanied by a selective process of the cognitive product practiced by the Syrian regimes official discourse, a monopoly which led to profound defects with regard to controlling the future of Syria. "Dominant power" is meant to distinguish between two correlated contexts which define both dominion and hegemony concepts, since the regime in Syria is the outcome of these two concepts, with their differences and intersections as a whole.

Hegemony, on the other hand, belongs to economic powers, traditional bourgeois and extraordinary bourgeois which originated from plundering the state wealth during the reign of Baath, and its connection with Gulf capital.

These are the powers which took hold of and prevailed over fortunes and investment opportunities and carried out interest deals with the influential people in the governmental institutions and administrations.

They are the powers which excreted the economic class really controlling the Syrian economy and can be idiomatically designated as the Controlling Economic Powers (CEP).

Hegemony belongs to the political powers of the Baathist ideology, institutions, administrations, armed forces and different security bodies that give orders to the state through the government and parliament to implement the decisions, which determine the structure of the state institution in Syria.

This, also idiomatically, can be designated as Powers of Political Decision (PPD).

Between these two powers, there is a strong interest relation so that the first provides the second with financial and material revenues in exchange for legislative and facilities from the second to make the investment jobs easier.

It must be noted that the (PPD) are in a way controlled by internal balances, the most important of which is the balance with the symbols of the Superstructure of the Syrian Society.