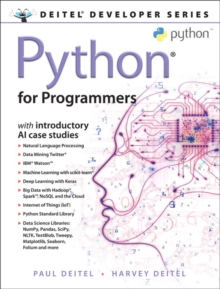 The professional programmer's Deitel (R) guide to Python (R) with introductory artificial intelligence case studiesWritten for programmers with a background in another high-level language, Python for Programmers uses hands-on instruction to teach today's most compelling, leading-edge computing technologies and programming in Python-one of the world's most popular and fastest-growing languages.

Please read the Table of Contents diagram inside the front cover and the Preface for more details. In the context of 500+, real-world examples ranging from individual snippets to 40 large scripts and full implementation case studies, you'll use the interactive IPython interpreter with code in Jupyter Notebooks to quickly master the latest Python coding idioms.

After covering Python Chapters 1-5 and a few key parts of Chapters 6-7, you'll be able to handle significant portions of the hands-on introductory AI case studies in Chapters 11-16, which are loaded with cool, powerful, contemporary examples.

See inside book for more information.