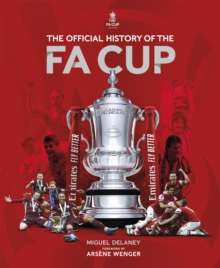 The official history of the FA Cup

By: Delaney, Miguel,  The FA,  Wenger, Arsene(Foreword by)

Explore the complete history of The FA Cup in this definitive illustrated book.

The FA Cup is the oldest national football competition in the world, and one of the most beloved and popular tournaments in football.

In 2022, it will be 150 years since the inaugural Football Association Challenge Cup was clinched by Wanderers Football Club at Kennington Oval.

Since then, 'The Cup' has become one of the premier tournaments in the sport, and an iconic mainstay of the English game. The Official History of The FA Cup, produced in partnership with The Football Association, is a lavish, illustrated tribute to this iconic competition.

Filled with stunning photographs spanning the full history of the Cup, this book celebrates the most exciting, significant and memorable goals, games and upsets in English football history.

Featuring insightful commentary on The FA Cup's development and evolution, details of every FA Cup-winning side, and an exclusive foreword by Arsene Wenger, this is an essential companion for anyone with a love of the competition - which is to say, fans of football everywhere.