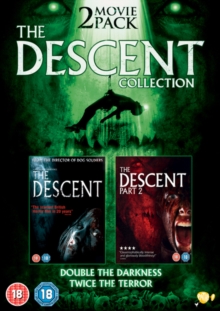 Double bill of horror. In 'The Descent' (2005) a young group of female friends go on a climbing expedition and find a lot more than they bargained for.

Lost in a cave, off the maps, they encounter a race of barely human cannibalistic subterraneans who are very, very hungry.

After Sarah Carter (Shauna MacDonald) is rescued from the Appalachian caves where several of her friends came to a bloody end, she is made to go back and help to try and find any remaining survivors.

The local Sheriff (Gavan O'Herlihy) is not wholly convinced by Sarah's version of events or about what she claims she and her friends encountered in the caves and so pushes for the rescue expedition.

It soon becomes clear, however, that every awful thing Sarah told him was true.