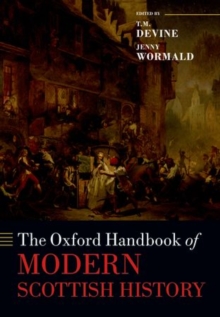 Over the last three decades major advances in research and scholarship have transformed understanding of the Scottish past.

In this landmark study some of the most eminent writers on the subject, together with emerging new talents, have combined to produce a large-scale volume which reconsiders in fresh and illuminating ways the classic themes of the nation's history since the sixteenth century as well as a number of new topics which are only now receiving detailedattention.

Such major themes as the Reformation, the Union of 1707, the Scottish Enlightenment, clearances, industrialisation, empire, emigration, and the Great War are approached from novel and fascinating perspectives, but so too are such issues as the Scottish environment, myth, family,criminality, the literary tradition, and Scotland's contemporary history.

All chapters contain expert syntheses of current knowledge, but their authors also stand back and reflect critically on the questions which still remain unanswered, the issues which generate dispute and controversy, and sketch out where appropriate the agenda for future research. The Handbook also places the Scottish experience firmly into an international historical perspective with a considerable focus on the age-old emigration of the Scottish people, the impact of successive waves of immigrants to Scotland, and the nation's key role within the British Empire.

The overall result is a vibrant and stimulating review of modern Scottish history: essential reading for students and scholars alike.