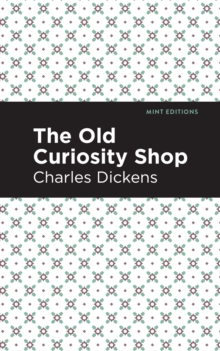 By: Dickens, Charles,  Editions, Mint(Contributions by)

"The greatest writer of his time."-Edmund Wilson "One of the great poets of the novel, a genius of his art"-Edgar Johnson"His characters are marvelous, his insights wonderful...you don't expect reality but you get something bigger and better."-Ruth RendellThe Old Curiosity Shop was initially published in a weekly serial, "Master Humphrey's Clock", between 1840 and 1841.

Charles Dickens' story of the frail and innocent orphan had become such a phenomenon that New Yorkers stormed to the wharf in expectation of the ship carrying the final episode from England.

The Old Curiosity Shop, ultimately published in book form in 1841, is considered a lesser known work from Dickens, yet its moving story is one of the finest examples of sentimental Victorian literature. Nell Trent, the protagonist of this novel, is an overwhelmingly good little girl who is orphaned into the care of her Grandfather, the purveyor of an odds and ends shop.

Her grandfather is a benevolent man, yet he hides behind a dark secret; he has been consumed with the habit of gambling; eventually he gambles away his shop to his creditor Daniel Quilp, one of the most heinous of all of Dickens' villains.

Nell and her grandfather flee London and, in their pursuit, they encounter a range of characters that are both goodhearted and the embodiment of evil.

The Old Curiosity Shop is an insightful tragedy of sorrows that that brilliantly paints the range of human intention.

With an eye-catching new cover, and professionally typeset manuscript, this edition of The Old Curiosity Shop is both modern and readable.