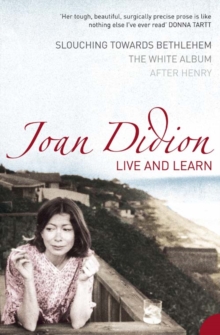 Live and Learn comprises three of the personal essay collections that established Joan Didion as a major figure in the modern canon ? arranged in chronological order so that readers can appreciate not only the qualities of the essays per se, but also their evolution over time.

It also includes a new introduction by Joan Didion herself.The stylistic masterpiece Slouching Towards Bethlehem (1968) has become a modern classic, capturing the mood of 1960s America and especially the center of its counterculture, California.

The cornerstone essay, an extraordinary report on San Francisco?s Haight-Ashbury, sets the agenda for the rest of this book ? depicting and America where, in some way or another, things are falling apart and ?the center cannot hold?.

The White Album (1979) is a syncopated, swirling mosaic of the 60s and 70s, covering people and artifacts from the Black Panthers and the Manson family to John Paul Getty?s museum.

Sentimental Journeys (1992) shifts its perspective slightly to take in Vietnamese refugee camps in Hong Kong, the Reagan campaign trail, and the inequities of Los Angeles real estate.An important collection, Live and Learn is the perfect one-stop primer on Joan Didion, and an essential reference for readers old and new.

It confirms the power of this uniquely unbiased, moving writer, and showcases her artful yet simple prose.