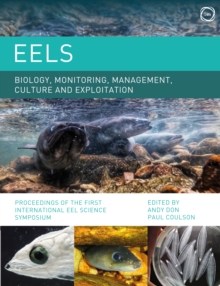 The freshwater eels, the Anguillids, have increasingly become the focus of attention for fisheries managers, scientists, researchers, policy makers, conservation bodies and other stakeholders.

These species can be seen as a bellwether for issues affecting aquatic ecosystems - their steep decline and the management initiatives to try and reverse this trend, touch on subjects as diverse as disconnected waterways, loss of habitat, novel parasites, pollution, over-fishing and climate change.

There are some 16 species of the Anguilla genus and all exhibit similar lifestyles, growing in waters often far-removed from their marine spawning grounds.

These enigmatic, contradictory and confounding species share similar challenges and pressures wherever they are found.

This book was generated from the 1st UK International Eel Science Symposium which was held at the Zoological Society of London (ZSL) in June 2017.

Hosted by the Institute of Fisheries Management (IFM), the ZSL, and the Environment Agency (EA), the Symposium was heralded as a success, with over 180 delegates in attendance.

Many of the world's top eel specialists attended or gave presentations across a diverse range of subjects. This was one of the Symposium's, and now the book's great strengths - its diversity of subjects and authors.

Many countries are represented within the book, from across Europe and as far afield as New Zealand, South Africa, Vanuatu, French Polynesia, Japan, Canada and the USA. The EA and IFM have collaborated to produce this landmark book which includes a mix of cultural, scientific and management information which will be invaluable to anyone with a professional or personal interest in these mysterious fish, including ichthyologists, fisheries scientists and managers, aquaculture personnel, environmental biologists and ecologists, marine and freshwater biologists, vertebrate zoologists, animal behaviourists and students studying in all these areas.

Libraries in all universities and research establishments where these subjects are studied and taught should have copies on their shelves.