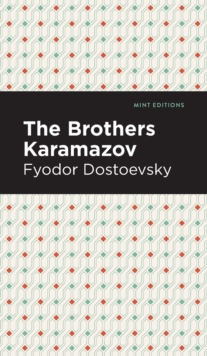 By: Dostoevsky, Fyodor,  Editions, Mint(Contributions by)

Three brothers and their relations in 19th century Russia provide the base for a sweeping epic of human striving, folly and hope. First published in 1880, The Brothers Karamazov is a landmark work in every respect. Revolving around shiftless father Fyodor Pavlovich Karamazov are the fates of his three sons, each of whom has fortunes entwined with the others. The eldest son, Dimitri, seeks an inheritance from his father and becomes his rival in love. Ivan, the second son, is so at odds with the world that he is driven near to madness, while the youngest, Alexi, is a man of faith and a natural optimist. These personalities are drawn out and tested in a crucible of conflict and emotion as the author forces upon them fundamental questions of morality, faith, reason and responsibility. This charged situation is pushed to its limit by the addition of the unthinkable, murder and possible patricide. Using shifting viewpoints and delving into the minds of his characters, Dostoevsky adopted fresh techniques to tell his wide-reaching story with power and startling effectiveness. The Brothers Karamazov remains one of the most respected and celebrated novels in all literature and continues to reward readers beyond expectation. With an eye-catching new cover, and professionally typeset manuscript, this edition of The Brothers Karamazov is both modern and readable.