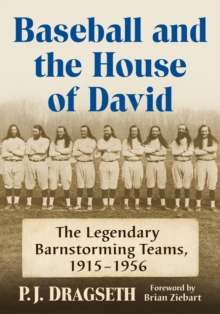 Baseball and the House of David : The Legendary Barnstorming Teams, 1915-1956

The Davids quickly gained popularity for their hirsute appearance and flashy, fast-paced style of play.

During their 200 seasons, they travelled as many as 30,000 miles, criss-crossing the United States, Canada and Mexico.

The Benton Harbor teams invented the pepper game and were winners year after year, becoming legends in barnstorming baseball. Initially a loose affiliation of players, the Davids expanded to three teams--Western, Central and Eastern--as their reputation grew, and hired outsiders to fill the rosters.

Prominent among them were pitchers Grover Cleveland Alexander and Charlie "Chief" Bender, both player managers in the early 1930s.

In 1934, before their largest crowd to date, they defeated the first Negro team invited to the famed Denver Post Tournament, the great Kansas City Monarchs, for the championship.