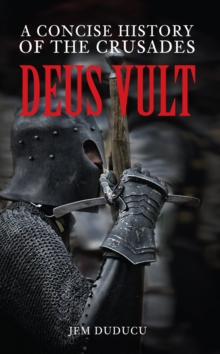 Deus vult : a concise history of the Crusades

'Deus Vult' - or 'God wills it' - were the words allegedly uttered by the crowd of people present when Pope Urban II's rousing speech caused the start of the First Crusade. Prior to 9/11 the Crusades had been seen as a somewhat obscure backwater of history; if they were mentioned it was usually as a background to Robin Hood stories.

However, post the terror attacks against New York and later Madrid and London, the Crusades have increasingly been referred to in the media, usually by politicians and, more rarely, by medieval historians.

To extremists of both sides they are shown to be proof positive of an inevitable clash of civilisations between Islam and Christianity. The real story of the Crusades, however, is also the story of Europe.

It is the story of great bravery, sheer folly and, surprisingly, diplomacy between East and West.

The conflict takes place in the giant and ancient cities of the Near East, the mist-filled forests of the Baltic, the baking deserts of North Africa and the Christian epicentre of Europe - France.

The story charts the origins of holy war to the fading away of one of the most prevalent movements in European history.

Deus Vult takes you on an exotic journey where politics and dynastic squabbles often take precedence over the will of God.