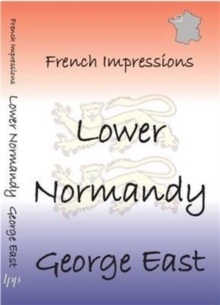 Part of the French Impressions series

The sixth in the popular French Impressions series, taking the form of a personal travel narrative exploring the three departements of Lower Normandy.

As well as reviewing more than a hundred towns and villages and tourist attractions, the book looks at the historical events and peoples which helped form the unique character of this part of France.

The book also features the recipes and background to many traditional and unusual Norman dishes.

In all, a complete celebration of one of Frances most beautiful and fascinating areas.

From the D-Day Beaches to the birthplace of William the Conqueror, George East's unique style paints a gloriously coloured picture of some of the most visited and intriguing parts of Normandy.

Learn about where your favourite cheese, cream and old and new French recipes come from, and even try them for yourself.

Extracts: 'Visitors from across the Channel often say how very much like the rural England of long ago it all looks, though I suspect the locals think it is quite French.

But I know what the visitors mean. Increasingly, the British countryside has been riven with roads, and our villages become drive-through reminders of how things were. Across the country it has not been possible to escape the cost of so many people occupying such a small area.

It does no good to complain about the inevitable, but here in this peaceful place is a poignant reminder of what we had and what we have lost'. 'As we near the border with Calvados, the columbage and thatched roof count rises rapidly.

Fresh flowers are knotted into the ridge of some of the thatches, which is an old Norman tradition.

It is said the practice dates back to Pagan times and was an offering to the gods of nature to ensure there would always be food and drink in the home'. 'In living memory, the greatest armada the world will ever see brought British and Allied troops to the shores of Calvados to fight on and win the beaches and beyond.

Further along the coast from the D-Day beaches are the iconic resorts which were the playground of the rich and idle in the years between the wars.

Inland is an eye-pleasingly variety of crags, hills and valleys, sweet winding rivers and the vast central cereal-growing prairies dotted with villages which sing of the past'.