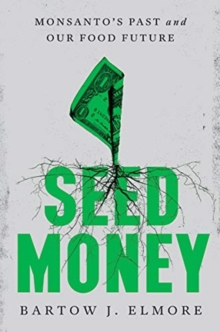 Seed money : Monsanto's past and our food future

This is the definitive history of Monsanto, a St. Louis chemical firm that became the world's largest genetically engineered seed enterprise.

Monsanto merged with German pharma-biotech giant Bayer in 2018 but its Roundup Ready seeds, introduced twenty-five years ago, are still reshaping the farms that feed us.

As new data emerges about its blockbuster Roundup system, and as Bayer faces a tide of lawsuits over Monsanto products past and present, Elmore's urgent history takes a penetrating look at the company's past.