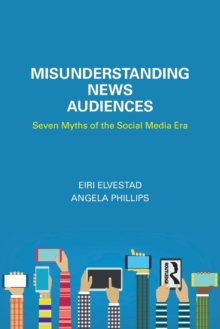 Part of the Communication and society series

Misunderstanding News Audiences interrogates the prevailing myths around the impact of the Internet and social media on news consumption and democracy.

The book draws on a broad range of comparative research into audience engagement with news, across different geographic regions, to provide insight into the experience of news audiences in the twenty-first century. From its inception, it was imagined that the Internet would benignly transform the nature of news media and its consumers.

There were predictions that it would, for example, break up news oligarchies, improve plurality and diversity through news personalisation, create genuine social solidarity online, and increase political awareness and participation among citizens.

However, this book finds that, while mainstream news media is still the major source of news, the new media environment appears to lead to greater polarisation between news junkies and news avoiders, and to greater political polarisation.

The authors also argue that the dominant role of the USA in the field of news audience research has created myths about a global news audience, which obscures the importance of national context as a major explanation for news exposure differences. Misunderstanding News Audiences presents an important analysis of findings from recent audience studies and, in doing so, encourages readers to re-evaluate popular beliefs about the influence of the Internet on news consumption and democracy in the West.